In the arms of life

A bad car crash took Kirsi Voutilainen into a vicious cycle of pain and surgical procedures. Dance brought back joy and acceptance into her life.

Every morning, a blond woman dances and balances on a cliff near the seashore. She is accompanied by a dignified dachshund gone gray who is searching for moles a few meters away with its tail fluttering from excitement. There is a walking cane leaning against a tree trunk. She grabs the cane with her when it's time to go back to the cozy warmth of her home.

Kirsi Voutilainen and her dachshund Ruusu visit the seashore every day. Ruusu has a hunting instinct, and while the dog is busy, Voutilainen exercises her balance, meditates, or dances.

Standing on one's own feet is the result of persistent work, which is why Voutilainen cherishes it both physically and mentally.

“Sometimes I tell my leg that if you break down now, you just go ahead – I will still step on you anyway.”

A tank truck hits the side of the car

On Finnish Independence Day on December 6, 1987, sleet was falling from the sky, and the highway was covered in a thick layer of wet snow. The next day, Voutilainen was to take an accounting exam in Vaasa where she was studying. In a black Morris Mini, Voutilainen and her then boyfriend set out to travel from Kuopio to Vaasa. She remembers a stop they made at a service station in Rautalammi. After that, the memories become thinner.

In the miserable driving conditions, the Mini started drifting towards oncoming traffic. The dairy tank truck crashed into its right side, on Voutilainen's side.

It took 45 minutes for the ambulance to arrive. Any longer and she probably wouldn't have made it.

“By coincidence, a doctor couple happened to arrive at the scene of the accident. Even they were not able to do much else than to cover me up.”

The head of the right femur had gone through her pelvis. Her liver had ruptured and required a 12-hour operation in Kuopio. The face and scalp were full of broken glass.

After this, there was a two-and-a-half-month period of intensive care and repeated surgeries. Something happened during her hip surgery: Voutilainen's right leg was struck with unbearable pain, her foot became paralyzed, and the nerve was permanently damaged.

Her nerve pain developed into CRPS, complex regional pain syndrome. In Vaasa, it was treated with electrical stimulation and later with functional exercises.

“The diagnosis was never properly explained to me. CRPS just is. It has made my life a living hell.”

CRPS is a long-term syndrome causing pain in the upper or lower limb, in which sensation and motor skills become abnormal. It involves changes in the central nervous system. Often the disease becomes chronic or spreads to other parts of the body. CRPS pain is unreasonably intense in relation to the initial trauma. The use of the limb can become more difficult due to pain, clumsiness, and lack of strength. It can alter the bones, skin, and body hair. The root cause of the syndrome is unknown.

When Voutilainen was discharged, she had lost ten kilos. Her broken wrist had metal to support it, and she had wooden crutches to support her walking.

Her boyfriend survived the accident with only some stitches needed. He was left with the burden of remembering everything that happened.

“At the time, nobody was asking us how we were doing. No care was offered for our mental wounds. And we were so young. We didn't realize it would be good to seek help and not just sweep everything under the carpet.” 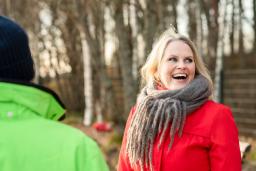 A vicious cycle of surgeries cuts off a career

After having been discharged from the hospital in 1988, Kirsi Voutilainen returned to Vaasa and continued her studies in the hotel industry. She studied for her exams at the bottom of the bed and went to physiotherapy.

“I had no muscles. My right-hand side buttock was like a pancake. Somehow I could walk, and that was enough.”

Voutilainen was employed by Finnair, first as a check-in officer and then in arrival services. It was a job she liked. Life finally appeared like the life of an ordinary young adult.

But after a couple of years, the pain started to escalate.

Her knee felt strangely erratic, it would sway, for example, when coughing. It turned out that the cruciate ligament was broken. She was also diagnosed with advanced osteoporosis. However, after the knee surgery, her hip was dislocated, and attempts were made to get a new prosthetic hip joint in place for five years. A surgical procedure was always followed by rehabilitation, then a setback and new surgery.

In a repetitive cycle of hope and disappointment, she began to realize that she would be unable to return to work. Her muscle strength had faded when she was ill, and her leg would no longer have allowed her to stand behind the service desk. Rehabilitation was slow and frustrating. Working out the gluteus medius muscle in her buttock would have been important, but it felt like the nerve was about to break. Voutilainen began to fear pain. The walking cane became her regular outdoor companion.

“You can survive from even worse”

On a disability pension, life became more smaller and confined: She went out with her dachshund, participated in group exercise sessions, and attended her French classes.

At the outpatient clinic at Töölö Hospital, she felt guilty and thought she was the wrong kind of patient and of the wrong age.

“When I look in the mirror, I wonder who that person is. Everything seemed so gray. It caused anxiety to think that the rest of my life would be like this, exclusion from everything. I didn't realize I was depressed, and that there were so many unprocessed issues.”

Voutilainen decided to change things. She began to learn meditation and mindfulness skills. She participated in silence retreats and studied self-help literature. She found stories of people living with ALS and people who had survived in concentration camps.

She started to think that you could survive even worse than what she had gone through.

Life began to expand. On a trip to Egypt, Voutilainen was emboldened enough to buy an Oriental belly dancing belt. She tried to dance standing in place: at first, she only shifted her weight from one hip to the other. And the movement of the pelvis did not hurt! She continued to dance and sought support from a physiotherapist.

Dancing took her out of the house and reconnected her with society again. In 2011, Voutilainen received an invitation to a therapeutic dance workshop. She became acquainted with the method of dancing using her own steps, encountering people, and being touched in a solidifying and healing way.

It freed her to live, to perform, and to defy her fears.

“I don't know what happened in my brain, but others noticed a difference in my being. The neighborhood store started asking me if I was in love or if I had found religion.” 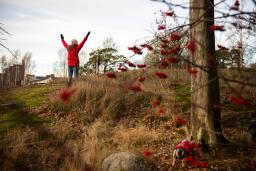 Dance frees you to live

Voutilainen danced more and participated in training, even though her mind was trying to find reasons why she shouldn’t.

She felt that she was participating in instructor training also because of personal mental growth, not because she would start providing instruction to others.

Fear was sometimes a physical, catastrophic experience for her. Yet she went out and kept herself active. Despite her fear of death, she acquired a driver's license and a black Mini Cooper.

“If I kept listening to the pain, I would just stay in bed. I did not choose the accident, but I can choose to play with the cards that I have left.”

Talking while acting as a dance instructor was even scarier than dancing alone. But Voutilainen tolerated her fear and began to take dancing to a more cathartic, emotional direction. She started a business of her own and began organizing workshops – even though that was scary too.

“With dance, I have the courage to live this short life the way I want to live it. It proves that I exist,” Voutilainen says.

Running a business is rewarding, stressful, and exhausting. She dreams about developing her company. She doesn't care so much about expanding it – she would much rather unite people, and get more and more people dancing. Yet she is aware that you must not cling to a dream.

“Sometimes I ask myself if I would have any joy in life, if I didn't instruct dance classes. I think I would have. But I could give that up, too.”

You cannot get rid of all your fears. Regaining trust in your own leg does not happen easily. Sometimes Voutilainen wonders what would happen if the leg were to break or become dislocated again.

She exercises the leg daily with small precision workouts and slowly extends her walking distances where the cane is no longer needed. The hip has not required surgery for almost 15 years, but the right leg is still mute and blind. The workouts do not seem to stick to its muscle memory. You can walk on it, but she has to look at it to control its movement.

But you still have to live a healthy life as much as you can. Perhaps the day will come when Voutilainen and Ruusu will be able to go to the woods to hunt for moles together, without a walking cane.

Text: Lotta Tuohino
The article was originally published in Husari 6/2019.