“The symptoms started with massive night sweating and itching of the thoracic spine area. Then I started having really bad pains on the right side of my upper arm and between the shoulder blades. During menstruation, I felt very dizzy,” Pakarinen says.

Pakarinen, who eventually went to the doctor due to a high fever, was found to have a large tumor in her chest in the mediastinum, as well as smaller tumors in her neck and supraclavicular fossa.

“I remember when it all happened, within a period of two hours. I went into a terrible shock, and it was all I could do to get out of the examination room. My mom saw my face and knew that everything wasn't okay. She told me I had said that I was going to die, it's cancer.”

Pakarinen's Hodgkin's lymphoma was treated in Mikkeli and she was told that it was unlikely that the cancer would recur. After that, Pakarinen moved to Helsinki.

After the move, her symptoms returned. She knew that under her chest the huge tumor had left a small residual piece that had not been active.

“I thought: Oh, it feels like a lot of weight. At some point, it escalated and turned into pain. In spring 2017, I asked for the check-up appointment booked after the summer to be brought forward, because I felt so bad.”

Pakarinen was able to reschedule the check-up appointment and it revealed that the residual tumor under her chest had grown large again. Treatments were initiated again; this time at HUS Comprehensive Cancer Center.

“The second time around it was a shock, but a different kind of shock. I was angry, and I remember screaming.”

“Afterwards, I felt like we are moving forward now.”

When her cancer type was again confirmed as Hodgkin's lymphoma, treatments were started. First she was prescribed cytotoxic drug therapy, and the tumor was scanned and monitored in between the therapy rounds. However, the cytotoxic drug therapy was not effective enough. After that, a decision was made to surgically remove the tumor. After the surgery, Pakarinen underwent an autologous stem cell transplantation.

“I was in the hospital for Christmas and New Year's. It happened at such a bad time, it couldn't have been more upsetting.”

After the stem cell transplantation, it was also decided that she needed to have radiation therapy. Doctors said the tumor was troublesome and therefore she was given several different treatments than what is normally given to this type of tumor.

“The doctors said that they would do everything in their power to ensure that the cancer would not return. I had no choice but to agree with them.”

Now Pakarinen is doing fine. Last June, she had a PET scan done and it showed that the tumor was gone. 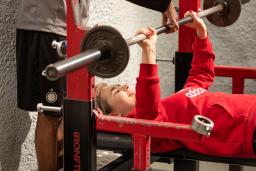 Occupational therapy to help in returning to everyday life

Pakarinen met with Occupational Therapist Anna-Elina Rahikainen by chance, after she visited Sylva ry when she was diagnosed the second time. Sylva is a Finnish association for children and young people with cancer.

“Anna-Elina happened to be there and we started talking. It turned out to be a little therapy session for me.”

The next time they met was during Pakarinen's stem cell treatment.

“Anna-Elina came to visit me for a chat. What stuck in my mind about Anna-Elina's visit was how well she handled my issues and faced me as a patient. I was able to tell her what I needed at that moment as a patient, no matter what it was about.”

Falling ill was a shock to Pakarinen, but so was returning back to everyday routines and normal life. When you are ill, you tend to be left out of everything, and she felt like she was always just waiting for the next check-up.

“At the occupational therapy clinic, we discussed my stresses and fears about returning to everyday life. We went through how I could start building my own everyday life.”

After the treatments, Pakarinen was on sick leave. At appointments with Rahikainen, they researched online for information on various services, current needs, and moods. In April last year, Pakarinen returned to her job as a salesperson.

“It was challenging. There was talk at the hospital that I need to avoid getting sick between treatments. There are a lot of people in the shop, and I had difficulties at first in getting back on board. But then I noticed that going back to work had been a really good thing and important for my physical condition and mental health.

Work brought more content to my everyday life.” She also likes to spend time with her friends and family. Going jogging is also important to her, and it was a way for her to start getting in shape again.

“I live as roommates with my best friend and we purchased gym cards in the fall, and now we go to the gym together.”

Some things have left her with questions. After falling ill, she would have liked to have more information on fertility and on how cancer treatments affect the chances of having children later on.

“When I was diagnosed, the only thing I wanted was for treatments to start. I was only thinking about my own survival from the disease. I didn't want to die; I wanted to live and everything else was forgotten.”

Now Pakarinen is experiencing symptoms of menopause at the age of 25. She feels that it would have been good to receive more information about hormone replacement therapy and fertility before the cancer treatments. Despite everything, however, she is thinking positively.

“I am feeling good. Of course, there is always the fear of recurrence, and I don't know if that fear will ever completely disappear. But I am looking forward in life, whether the cancer returns or not. I believe that if the cancer recurs, it will be treated and life will continue again.”