Kasperi, who has an orphan disease, is inspired by science through his own experiences and wants to have an impact on society

“My disease was diagnosed when I was born. Back then, in 1999, they did not know so much about this rare disease. Today, science has moved on, more information is available, and it can be utilized better than ever. It's really great.”

Since birth, the hospital environment has been part of Kasperi's life. Especially when he was younger, Kasperi and his mother would spend a lot of time undergoing examinations and treatment.

“As a child, I couldn't keep up with all the new people I met in treatment situations. However, the fact that I was interested in medicine from a very early age made it easier to get used to the hospital world. I remember getting plastic syringes and stethoscopes from the hospital to take home with me and to play with. Even such a small thing made a big difference in the fact that I was not so nervous about being in hospital.”

The transition from the former Children's Hospital to the adult care units took place gradually when Kasperi was 18 years old. The transition included some major changes. Previously, the treatment had been centralized to Children's Hospital, but now as an adult, his care has been divided between several different units. Nowadays there are fewer treatment appointments and Kasperi strives to handle his appointments more independently.

He had the same personal physician throughout his childhood at the Children's Hospital, and giving up a familiar person was a tough one. However, the former physician helped with the transition by finding him a new personal physician from among his colleagues in the adult unit who is familiar and interested in the disease.

“The best thing about treating my illness has been that I have had a personal physician. It has always been nice to go to my appointments when there’s someone you know to greet you. That makes you feel safe and you know you are in good care.” 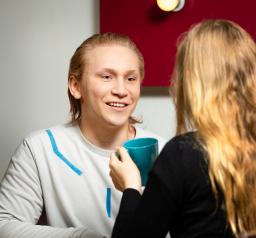 Kasperi, who lives in Lohja, lives an active young person's life, which includes, among other things, outdoor activities in nature, reading, and cycling. Visual arts is one of Kasperi's longest-standing and most important hobbies. The list of recreational sports also includes swimming, yoga and boxing, and his next dream is to try self-defense sports.

The disease is his life companion: sometimes it creates challenges and sometimes he can almost forget the existence of the disease.

Currently, Kasperi is trained as a chef and waiter, but the illness makes it difficult to work in his own field. In the school world, the disease was visible in the fact that due to his learning difficulties, he participated in small-group instruction a lot. It was sometimes difficult to participate in certain sports during physical education classes. Apart from these issues, the illness did not interfere with his school education. Kasperi was also never bullied at school.

He feels that towards adulthood, he has found a calm and good perspective on his illness.

“Nowadays, I don't actively think about my illness anymore. I'm not very constrained by my symptoms.”

Making an impact and future challenges

Living with a rare disease has given Kasperi some insights that he can express to have an impact on the common good, which is why he is involved in the HUS customer panel activities in Lohja and Helsinki.

“In both the panels, I am the youngest in the group, and I feel that people are interested in hearing what a young person with a rare disease has to say at the meetings. For example, my process of being transferred from pediatrics to the adult unit was such a process in which I noticed that there is always something to improve. I find influencing things very interesting.”

In addition to his influencing work, Kasperi has a clear goal for the future in mind.

“I would like to study for a new degree. I am in a good position, because I find myself interested in a little bit of everything, which is also a bit annoying in a way. All I need to do is find the most genuinely interesting place to study.”

However, the time spent in medical care has provided inspiration and interest towards the health sector. Kasperi is interested in technology and robotics, and he could see himself designing new technical solutions for the medical sector.

“With my own illness, I have started to dream of designing new cures and inventions. The world of robotics is developing very fast and could be combined with a medical perspective. It would be nice to help people that way.”