The explorer wants to talk

Severe glomerulonephritis turned Erno Rajahalme's life upside down twice. As a result, Rajahalme discovered his gift of speaking and his calling for being an expert by experience.

Spring was difficult for him. It was 2014, and 28-year-old Erno Rajahalme was finishing his studies in Joensuu to become a practical nurse. Alongside his studies, Rajahalme played floorball and went to the gym. Hard workouts many times a week gave him a lot and also required a lot. At times, he was exhausted.

Rajahalme had been looking for his own path in life for a long time. As a practical nurse in the field of early education and care for children and adolescents, he planned to go to work in a day-care center. And that was all he had planned, for the rest of his life. When he was retrieving his diploma, he had never felt better.

After the graduation party, he experienced a strange, total fatigue.

His face and legs were swelling up badly. He was thirsty and nauseous and had lost his appetite. There was blood in his stool. Rajahalme was too unwell to even ride a bicycle.

The nurse at the health center assumed that it was an exceptionally severe case of pollen allergy. He returned home until a few days later he had to go to the central hospital. He was just able to say to the triage nurse who was assessing his need for treatment that he was unable to breathe.

The collapse of a basically healthy and fit young man seemed inexplicable. During imaging, laboratory examinations and waiting, Rajahalme began to realize that there was something seriously wrong with his body.

Are you passing urine, the doctors asked.

Rajahalme had not known to pay attention to that. And no, he was not passing urine. And he would not be for the next four years.

Creatinine, which provides an indication of renal function, had increased to more than 20 times the reference value. His kidneys had shrunk to the size of raisins, and physicians were unable to even get renal tissue samples. The cause of the extremely severe renal failure was never established – you just had to deal with it.

In the intensive care unit, Rajahalme's carotid artery and central vein were catheterized to start hemodialysis: the removal of waste products and excess fluid from the blood.

He could only lie in one position. His level of consciousness fluctuated. He felt pain everywhere.

“It was the longest night of my life. I was thinking if this is where it all ends,” Rajahalme says.

After the situation normalized, he was transferred to the internal medicine ward. Hemodialysis was performed three times a week. You can get used to the noise and hoses of the machines, but not to the chilling cold of dialysis: during dialysis, the blood always cools down.

After being discharged, he needed to closely monitor his blood pressure and eat food which is suitable for a person with renal failure. There was a one-liter limit for fluid intake in 24 hours. There were half a dozen hypertension drugs he needed to take. Trace elements and vitamins consumed in dialysis also needed to be taken as supplement preparations. Life revolved around dialysis: Rajahalme felt like he was either going to or coming from the hospital. The dialysis catheter sticking out of his neck was not supposed to get wet. You could forget about swimming that summer, and you couldn't go out without an umbrella. Rajahalme would not receive the actual vascular access for hemodialysis until later.

At home, in a familiar environment, he realized that his life had changed permanently. The future he had been planning for himself had vanished into thin air. He had wanted to take care of others, but now he had to be taken care of instead.

The sadness and feeling of emptiness made him burst into tears. 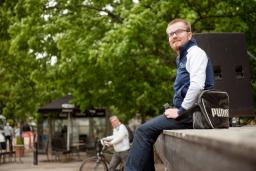 There’s only one up way from the bottom

Although Erno Rajahalme was sad about his fate, he did not want to give up. The support of his family and other loved ones provided comfort. The crisis made the family even closer knit.

Rajahalme says he is a moderate Christian. The idea of life continuing somewhere else alleviated his fear of death, providing comfort and peace in the midst of suffering.

“My trust in health care also helped. Especially during these years, the doctors and nurses have been good to me.”

After recovering from the initial shock, Rajahalme posted an update on Facebook saying that his kidneys had failed. Openness proved to be a great choice. He received an astonishing amount of love and compassion, both from his family as well as his friends.

People came together during the wait for the transplant. It is this endless compassion that Rajahalme wants to continue passing on as well.

He was placed on the transplant list to wait for a new kidney in early spring 2015, less than a year after becoming ill. A sense of responsibility, commitment and positiveness helped in tolerating the long wait and the adversities along the way.

Like Rajahalme losing consciousness after home dialysis, resulting in him falling and hitting his head. A subdural bleed had to be operated on at Töölö Hospital. For the convalescent period, he needed to be removed from the transplant list.

Or that the severe renal failure and high blood pressure have caused unspecified epilepsy and a cerebral aneurysm. The neurologist predicted that the epilepsy would disappear within a few years of the transplantation.

At times, they examined his enlarged lymph nodes, and sometimes it was the heart. When Rajahalme began to feel that, overall, far too much had happened, appointments with a psychiatric nurse helped in clarifying his thoughts.

He always kept his phone on – a call about a suitable kidney could come at any time – and he tried his best to stay healthy. To take his medication, adhere to his fluid restrictions, and follow a balanced diet.

However, his fighting spirit did not last indefinitely. The injection sites used in dialysis were infected from time to time. A couple of times he developed sepsis. During a febrile infection, Rajahalme was always removed from the transplant list.

There were also problems with eating and drinking. Since urine was not excreted at all, he was only allowed to drink one liter of fluids per day. It was difficult to remain in such a small amount. His weight easily increased by more than two kilograms between dialysis sessions. And there was no word from the transplant. Treatment fatigue struck him hard.

A speaker by experience is born

Erno Rajahalme has always known that he is a person who is looking for something. After high school and the army, he thought long and hard about what would interest him. While waiting, he worked in a variety of customer service and moving service jobs.

He was afraid of performing and tried to avoid it.

In the aftermath of the fall in 2015, Rajahalme began to entertain the idea of getting to know other people who had fallen ill; to encourage them forward. The names and faces of other people suffering from similar illnesses gave him miraculous strength: all of them had their stories and they were still alive.

The Finnish Kidney and Liver Association was excited to welcome a young man who wanted to share his story. Rajahalme had found his own brand of activity: he decided he was going to go and talk about kidney issues wherever he was asked to do so. The story of the kidney’s shutting down began to be recorded in his blog and Instagram. First Rajahalme started training as a peer support person and then as a trainer by experience.

“I want to tell you that I have experienced terrible things and yet survived. I feel that by talking about it I can be of help and assistance to people in a better way.”

It is no longer a big deal for a person with performance anxiety to participate in a live TV broadcast or to lecture to a 100 people. Supporting others is his passion. He has been touring to talk to health care sector students about the life of a dialysis patient and, among other things, the care required by an arm with a hemodialysis access fistula. If the vascular access buzz cannot be felt, the fistula may not be functioning. 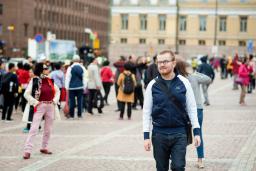 Towards a new normal

The call from the organ transplant office that he had been waiting for four years lasted 44 seconds. Rajahalme was spending Saturday afternoon on dialysis. Movie tickets purchased for the evening remained unused when the taxi left Joensuu towards Meilahti Hospital.

The transplant surgery started in the morning. It went excellently, and the transplant was already producing urine during surgery.

“April 7th is a holiday that I plan to celebrate every year,” Rajahalme says.

He says he is grateful for every morning – and for every visit to the bathroom.

“You can hit me if you ever catch me complaining about having to go to the bathroom,” he laughs.

According to laboratory tests, the kidney is operating perfectly normally. There are still quite a few medications he needs to take, although he hopes to get rid of blood pressure medication soon. He will take the antirejection medication for the rest of his life.

Rajahalme can eat and drink almost anything he wants. But the cold and hot chains must not be broken. Blue cheese may have listeria, so you need to avoid it. Fruit and vegetables should be washed thoroughly. The fluid balance should not falter, and it is better to be in the shade than in the sun.

Alcohol can be consumed if desired, but in moderation.

“It would be completely unforgivable if I would vomit out my antirejection medication because of alcohol and then get into trouble.”

Now his days are filled with work in the patient organization as a trainer by experience and as a HUS expert by experience: various types of lectures, meetings, and working groups. It is not likely that Rajahalme will become a pediatric practical nurse anymore. He gets tired easier than before, and his resistance is clearly impaired. A day-care center would not be a safe place for him to work. Working with young people would perhaps be better?

What Rajahalme is hoping for the most is to be able to support himself as a speaker.

Text: Lotta Tuohino
The article was originally published in Husari 4/2019.