Anna Nyström wants to keep active and enjoy the beauty around her. That's why accessibility is a matter close to her heart.

Every morning, Anna Nyström's brain starts to swarm with all kinds of questions: How do I get out of bed? How do I get to the bathroom, what about taking a shower? How is breakfast going to work out? How do I dress today? What is the weather like? Is it windy outside? Can I open the doors unaided, or is someone coming with me? And are there cobblestones on the route? After all, they do feel like a downright nuisance to a wheelchair user.

“After all this has been gone through, you can think about what you actually want to do,” Nyström laughs.

When things work, Anna Nyström's ordinary life is fantastic. She has a loving spouse, two grown-up children, a little dog and a beautiful, functional home in the inner city of Helsinki in the midst of all the available services.

Ordinary life also strains and irritates her, and her diagnosed muscle atrophy disease SMA brings an exciting extra flavor to her days. Special needs encourage accuracy, so Anna Nyström has developed into a skilled planner. She weaves out continuous chains from the day's processes, where both small and large matters have been taken into account.

There will always be problems, but at least some of them can be tackled in advance.

Do you see the person or the assistive device?

In the 1980s, Anna Nyström was still walking without any assistive equipment. She was engaged in her business and marketing studies. Nyström was energetic and kept standing all her workdays and bus trips to work – there was always the risk that when she sat down, she would no longer be able to get back up on her feet.

Nyström still remembers the details of her routes going to school and work, from the door thresholds to street surface materials and floor covering materials: the friction, slipperiness, height and number of stair steps, railings, and lack thereof. Weights of doors, shapes of door handles, and heights of tables and chairs.

“Every single millimeter had an impact on whether I was able to continue forward, up or down: anywhere where others had already gone.” The onlooker might have only noticed that a young woman was walking a bit more slowly than the others.

“A muscle disease does not define a person. It's just one feature,” Nyström says.

“And you can't tell from a person's external appearance what causes them difficulties in day-to-day things.”

Decades of experience with a rare, progressive muscle disease has made Nyström skillful in her evaluations and efforts to develop matters. When moving around in a wheelchair, she can see painfully well where the user of the service has been taken into consideration and where not.

“You often notice that things have been done to some extent, but only because the regulations require you to do so. Not because you really want to make things functional and accessible.”

Nyström likes to give feedback, and she always tries to combine her feedback with a suggestion as to how to do it better. As a member of HUSLAB's customer panel, Nyström is able to participate in the development of services, use of facilities, and the culture of care. It has been rewarding to commit to the two-year position as a member.

But if there was a choice, Anna Nyström would not be making a big deal out of her special needs. Sometimes you just have to in order to be able to live your life.

“Accessibility issues affect the daily lives of thousands of people: assistants, family and friends, the work community, and neighbors.”

Examination equipment must also be accessible. It may be a matter of life and death whether, say, you are able to get close enough to a mammography device or not.

“As a society, we still have plenty of work to do, so that we would see the person and not just his or assistive equipment.” 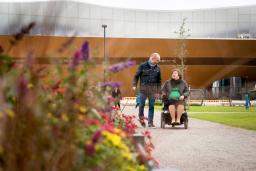 Nyström's underlying disease, SMA, or spinal muscle atrophy, is a recessively inherited spinal muscle disease. The spinal motor neurons in the spinal cord do not receive enough of a specific protein that is required to transmit a message to the voluntary muscles. When the nerve connection is broken, the muscle will no longer contract and a gradual atrophy begins. SMA does not affect the development of the mind.

The disease is divided into different types based on the age at which the symptoms start. The most severe type 1 disease begins before birth. The next most severe and also the most common type 2 begins at the age of less than six months. The disease is diagnosed by analyzing a DNA sample from the blood.

Nyström's disease is of type 3, in which the child learns to walk but is clumsier than their peers. For every type of disease, the disease will progress. There is no cure. Physiotherapy helps in maintaining range of motion, and keeping active and moving is important. Nyström says that even just one week without a workout feels like taking steps backwards.

SMA is a rare disease: there are approximately 200 patients in Finland.

Anna Nyström only met a person with a similar SMA diagnosis as herself while pregnant with her firstborn at the age of 29. During the time before online peer groups, Nyström often thought she was the only one with type 3 SMA in Finland.

“Compared to others, I was always either too healthy and fit, or then too sick and unfit. There is nothing to replace the fact that there is someone else who has experienced the same things as you have,” Nyström explains.

Everyday life forces you to be creative and resilient. Matters associated with transitioning from place to place and getting dressed can be very challenging.

“If I can't open the zipper on my purse, I will need to keep pushing to solve the problem. I just can't sit there and worry.”

Sometimes you can see the progression of the disease in not being able to use a tool like you used to. Sometimes the assistive devices are broken: for example, a wheelchair tire can go flat due to broken glass.

A drug called nusinersen can slow down the progression of the disease and mitigate symptoms, but it is very expensive and its use in public health care has been restricted. The Council for Choices in Health Care in Finland (COHERE Finland) has recommended that nusinersen be administered only to SMA patients under the age of 17 who were diagnosed under the age of 2. There are perhaps 30 such patients in Finland.

There is no equivalent medical evidence of there being benefits to older patients and patients diagnosed later. This means that Nyström will not be receiving the medication for her illness in the near future, at least not in Finland. In many European countries, SMA patients of all ages receive the drug. “The medicine can affect whether you are able to eat ordinary food independently or use your computer and phone yourself. You do not need any miraculous improvement or the recovery of your lost ability to walk. It would be a victory if the drug stopped the progression of the disease.”

Anna Nyström had never expected that such a drug would be invented. Now the drug exists, but it is out of her reach.

“I can't keep thinking all the time that the treatment has been found, but I can't have it. You get tired of it.” 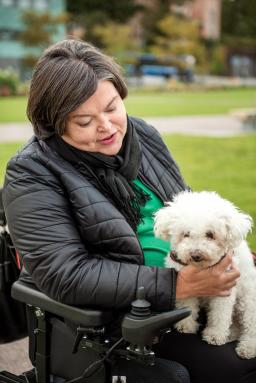 Accessibility issues need to be voiced

Nyström cannot use gym equipment, but she loves to swim. You can move around in water in completely different ways than you can on dry land. That is why she finds it intolerable that there is no completely accessible swimming pool in Helsinki sufficiently close to her, where she would be able to rehabilitate herself in water. A vital, beloved hobby has been left behind.

Nyström returns to the issue of accessibility again and again. How dramatically it can influence who gets to access a particular place at all, or hear or see a particular thing. And how often it is impossible to get information about it in advance.

“Finland often invokes the fact that old buildings cannot be made accessible. Well, the Colosseum is very easily accessible by wheelchair and has a brand new glass elevator. In Rome and New York, for example, theaters are often built without stairs or steps. Everyone walks along ramps or inclined floors. It has been understood for a long time, that it makes it easier for everyone to walk.”

Nyström is still delighted by the Roman restaurant whose toilet doorway was a bit cramped for a wheelchair – but the door was raised off its hinges in the blink of an eye and without asking, just so that Nyström would agree to come to dinner. A wheelchair user was seen as a desirable customer just like everyone else.

Nyström hopes that accessibility would always be mentioned in hotel descriptions, for example. The other day, she bombarded the editors of the “Nyt” weekly supplement of Helsingin Sanomat about adding information about a restaurant's accessibility to the newspaper’s restaurant ratings. Success in the issue called for a celebration.

“There is a solution to just about every issue, if you really want it,” Nyström says.

“If society is open, personal assistance and assistive devices are available and the environment is accessible, even the disabled can work. Accessibility is taking away from no one, but is rather for everyone's benefit.”

Three things that give me strength

Text: Lotta Tuohino
The article was originally published in Husari 5/2019.