Santra Lacy's world was changed drastically by a stoma: before long she had the courage to get a dog, start psychotherapy, and enter into a new relationship.

Graceful Chinese Crested dog Wilho wags his tail and drops the ball at the feet of his mistress Santra Lacy. Lacy throws the ball and Wilho dashes after it and brings it back just as excitedly.

The cheerful and gentle Wilho is an integral part of 38-year-old Lacy's improved life. It also includes a good relationship with her partner, a pack of other beloved animals, lots of outdoor activities, and energy. And an ileostomy that for more than a decade now has kept the symptoms of an exceptionally aggressive case of Crohn's disease in check.

“I can't really know if the absence of symptoms is due to the stoma, the biological medication, or something else. I'm sure there are many factors in this,” Lacy considers.

“But I do think that the dog has rehabilitated me.”

A race against inflammation

Santra Lacy was born in the United States into a family with an American father and a Finnish mother. After her parents divorced, Lacy grew up in Espoo with her mother and her Indian stepfather.

At the age of 11, Lacy began to suffer from severe abdominal pain, fever, and nausea. A year later, she was diagnosed with Crohn's disease. Her care was transferred to Children's Hospital in Meilahti.

Lacy suffers from a form of Crohn's disease that causes the inflamed small intestine to form strictures which form scarring and prevent the chyme from advancing in the intestine. In an inflamed intestine, nutrition is not absorbed as well and this will result in malnutrition.

When she was 14 years old, a decision was made to surgically remove a part of the small intestine for the first time. The intestine had formed a stricture along a length of 20 centimeters, and the blocked piece needed to be removed. This was intended to ease the disease, but soon after, the infection flared up again and a stricture formed which blocked the intestine. A new surgical procedure was required.

Medicine and Lacy struggled against the disease, but the relentless pain and vomiting returned nonetheless. Between surgeries, efforts were made to find suitable medication therapy for her. Lacy is one of the first Finns to receive biological medication for Crohn's disease. She went through the usual drugs prescribed for the disease and even participated in a tuberculosis drug trial.

Nothing restrained the inflammation of the small intestine. 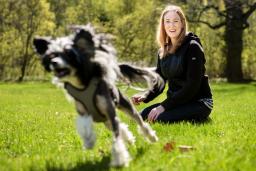 A stoma took the pain away

After thirteen years of illness, Lacy's nutritional condition was beginning to be very poor. She lived with her then husband in Oulu and was studying to become an HVAC engineer at the university of applied sciences.

The constant recurrence of Crohn's sucked everything out of her life. Surgeons had been forced to remove long stretches of the small intestine forming strictures one after another – 80 centimeters were removed in one surgery alone, after which the intestinal suture lines failed.

A temporary stoma was created in an emergency surgery. Lacy woke up in the recovery room and felt her stomach. There it was, the stoma bandage.

“At the time, I wondered how it made me feel. Nobody wants a stoma, right?! But it actually felt like nothing at all; neither good nor bad.”

Life with the temporary stoma proved to be surprisingly pleasant: at last, a way had been found to keep the pain under control. But she was no longer able to handle her studies. The studies caused a wrong kind of stress, and it exacerbates the disease. A life-long dream of becoming an engineer had to be buried.

“I felt like a loser. There was nothing in life, no substance, no future.”

Lacy had always been comfortable at home: this was guaranteed by her Burmese cats Aamu and Mocca. Now she barricaded herself at home and focused on playing video games which were based in fantasy worlds. Those worlds made things look a bit brighter.

When closing the temporary stoma, the surgeon observed that there was inflammation in the intestine again. Lacy expressed a wish to have the stoma back, this time for good.

They are not done based on patient requests, there must always be a medical reason, the surgeon had replied.

"I then asked them to come up with that medical reason. When I woke up from the next surgery, I felt the stoma bandage on my stomach again.” The surgeon had decided to prepare for a suture line failure in advance.

A world without pain

When the disabling pain stopped, a new world opened up for Santra Lacy. It was so much more pleasant to visit outside the home, because even if you had eaten something, there was no compelling need to go to the bathroom right away. The stoma left some leeway for life.

For the first time in her adult life, Lacy had the energy to move about:

“Crohn's inflammation leaves you flaccid and limp, and I no longer feel like that with the stoma.”

She was still severely malnourished. Eating began to be impossible, as almost nothing was absorbed through the intestine. She was diagnosed with short-bowel syndrome: there was so little of the small intestine left that it could no longer perform its functions.

Minerals, vitamins, fluids, and other nutrition had to be administered intravenously. The home hospital came three times a week to give the infusions.

Then she faced a divorce. Lacy decided to move from Oulu to Espoo, closer to her mother. The infusions were continued by the home hospital in Espoo.

Then the nurses taught her how to prepare the required infusions herself. At nights, she began to drip the solutions she had mixed from nine different concentrates directly into her vein, through a venous port fitted below the clavicle. Her quality of life increased tremendously, even though she had to protect the hose system from cats' teeth at nights.

When the venous port finally became infected, it had to be removed.

“A new one was not fitted. There was 170 centimeters of the small intestine left, and the physicians thought that it should be enough to live on, without any infusion bags.”

True: A 170-centimeter small intestine is enough, as long as Lacy will be meticulous in taking three protein drinks every day and a liter of potassium-sodium solution prepared by order for her in the Yliopiston Apteekki pharmacy.

“I have a good physician and care team in Meilahti. The first time I tasted the potassium-sodium drink, the physician raised a glass with me and encouraged me that it is not so bad.”
During the 10 years with the stoma, she has been able to gain 10 kilos in weight.

“It's a huge achievement! Finally, my body is taking in fluids and nourishment.”

Life without pain and infusion tubing started opening some surprising doors for her. The idea of a dog began to creep into Lacy's thoughts, even though she wasn't supposed to be a dog person.

“Dogs are so energetic,” Lacy laughs.

She was a bit nervous. Can you cope with an animal requiring regular outdoor activities, if you have spent your entire adult life indoors? What if all the good progress suddenly comes to an end, and you are forced back into a drip or a recurring cycle of infection?

In the middle of the cold winter arrives Wilho, a happy little Chinese Crested pup. And soon, Lacy also met a new man. She started psychotherapy and was able to work on her self-esteem issues that had already emerged during her adolescence, and to repair the distortions in her thinking caused by the long-term illness. At the same time, she agreed to try a new biological drug.

Lacy cannot say that she is cured, but she has been free of Crohn's disease symptoms; now even without any biological medication.

The walks with the dog slowly increased in length as she gained strength and became more fit. After a year, jogging and a regular daily rhythm had strengthened her to such an extent, that it was easy to start agility as a hobby with the dog.

The illness had tied Lacy home, but now therapy forced her to go out of her home.

She realized that she was in the best shape of her life.

Although the disease is not presenting any symptoms at the moment, excessive stress can impair the patient’s condition and lead to recurring inflammation. Santra Lacy has been on a part-time disability pension and unemployed for a year now.

Volunteer work has become a suitable way to make a difference and build a better world. She maintains the peer support groups of the Crohn and Colitis Association, chairs the Ilco Uusimaa association for stoma patients, and is a member of the Board of Directors of the national Finnilco Association. She is also an expert by experience in HUS.

When Lacy tells practical nurse students about the life of a patient who has undergone a stoma procedure, she emphasizes that a stoma patient must be seen as a person, not just as a stoma case. If people around the stoma patient regard the stoma as something positive, the stoma will not be able to take control of the patient’s life.

“A stoma does not mean the end of the world, it just enables a different kind of life. For many, it is a better life,” Lacy says.

For Santra Lacy, the stoma has enabled a life where she can take long walks with the dogs or even spend nights in the Arizona desert looking for snakes with a local guide. Lacy and her boyfriend have already made three tourist trips to see snakes in Arizona and California. The hot weather requires special attention to ensure sufficient hydration, but the itinerary always includes days just for recovery and rest.

“I can't believe I can actually do it. A year ago, we were in the desert at night, and as the only woman in the party, I said I needed to go to the bathroom. The driver pointed outside and said that's the bathroom. In order to empty the stoma bag, I would have needed two hands, and a third one to hold the flashlight. That's when I thought how on earth have I ended up in this situation.”