Back into the sunlight

A cerebral infarction forced Pekka Aho to give up flying, but a new connection with nature and photography has emerged in its place. As an expert by experience in HUS, Aho tells his story to those who have experienced the same fate and guides them towards new beginnings.

On February 3, 2013, Pekka Aho was a successful commercial pilot from Helsinki and a man living his best years: a persistent performer, a lightning-fast decision-maker.

54-year-old Aho had just completed a five-day ordeal; a pilot’s periodic health inspection. He had established that he is on top of all the constantly changing regulations, theoretical knowledge, and the subtleties of aviation English. His blood pressure had risen to the upper limits of normal readings, but work would continue for another year, at least until the next health exam.

That Sunday morning, however, he was not feeling well.

His left arm felt numb and did not move. He was not able to lift his head from the pillow. Nothing was hurting, but only his right arm would function. Aho was alone in his Seinäjoki work apartment, and his phone was not at his reach.

There goes my pilot’s license, was his first thought.

Life on the wings

The passion for flying was ignited at just five years old, when Pekka Aho received a model plane from his father. There were role models in his South Ostrobothnian family: his uncle had flown a bomber and a cousin a fighter jet.

By the age of 15, he had found gliders, and there was no room for anything else in the world. A couple of years later, he acquired a power pilot's license, but only in order to be allowed to tow a glider into the sky.

Aho says that in the air, a mystical sense of freedom comes over you. That's as good as it gets in the world.

In the early 1980s, he was asked to join the Wasawings airline. He worked for three years as co-pilot, another three years as captain, and for the last year as the company's senior operator. It was a great period that ended in Wasawings' bankruptcy and a recession period. Aho was left unemployed.

“Unemployment was really not my thing, so after two weeks I started a photography company,” Aho says.

Three years later, he had the wind under his wings again: Aho was asked to fly a private business jet. Customers toured Europe, and he spent 180 days of the year abroad. Many of the trips required work on weekends as well. The work was fun, although sleeping in hotels had lost its charm.

In his opinion, he was still a merchant whose hobby was flying. But the regulations associated with the aviation hobby kept increasing all the time, and there were continuous changes in stipulations. Maintaining his professional skills up to date required Aho to make a choice, so he finally decided to become a professional pilot. The photography business in Seinäjoki received a new owner.

Perhaps it was the physical condition of a pilot that saved Aho on February 3, 2013. Although only one arm obeyed orders, he managed to pull himself from the bedroom to the kitchen.

His recollections of what happened are permanently fragmented, and the one-and-a-half hour journey to the kitchen remains hazy. At some point, he had yanked himself under the bed. How weird, he thought, as he was staring at the bed's base boards.

When he had finally managed to call the emergency number and open the door to the paramedics, he remembered praising the ambulance as being very nice. In the emergency department at the central hospital, the nurse asked if Aho had been drinking. Then the film was cut off.

He spent eight days in the intensive care unit, which felt like an eternally long, bright morning. At death's door, he was overcome by a feeling that all was right in the world. There seemed to be a universal plan behind it all.

During fleeting moments of consciousness, he saw his wife and daughter crying at the end of the bed. Even about that, he can only remember the idea of him being wanted back on this side of the world. And he wanted to come back.

However, the clot that entered the cerebral circulation had managed to do a lot of damage. The left side of his body was completely paralyzed.

“The doctors said that I will never be a pilot again and that the best days are now gone,” Aho says.

“It was a harsh message; I’m still trying to process it.”

“One of my friends has stopped flying; of his own volition. I did not get to choose whether I wanted to quit.”

Aho was sent by ambulance for further treatment to his home municipality, to Meilahti Hospital.

“The nurse who met us said that let's get you in shape again. I am eternally grateful to the nurse for her positive words.” 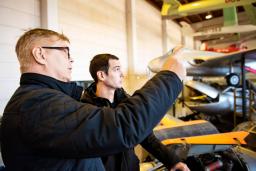 How to hold a paper mug

At the age of 50, Aho had thought that his life had just begun – there seemed to be so many good work trips still ahead. At the age of 54, his dream job as a pilot had changed from an active life to a rehabilitation process following a stroke.

“Until this, I had still been young and gorgeous. Such is life,” Aho grins.

Rehabilitation began with the basics of everyday life in the neurological inpatient ward at Meilahti and continued at Laakso Hospital. He learned how to use his left hand again. How to squeeze a ball and dine by using both hands. And how to handle a paper mug gently, without crushing it.

Physiotherapists and nurses gently forced him forward as he tried his best to be lazy. Step by step, Mr. Aho's skills and strength returned. Forest paths taught walking on inclined, uneven surfaces.

He says that according to the discharge summary, a significant part of his brain has been destroyed. It has affected the functioning of his body in many ways.

“I still have a loss of sensation in my left foot, which means that I do not notice if there’s a stone chafing in my shoe, for example. At times, there is a lot of blood when I return from my walks.”

Essentially, however, the everyday functional capacity seemed to have returned. Aho felt good – possibly even a little too good.

He still didn't like being idle, so he decided to learn a new profession. The pension insurance company supported his decision, and after completing studies for a year longer than the others, Aho graduated as a real estate agent.

Learning new things demands so much from him now.

When work began, it turned out that his ability to process information had suffered more than Aho had anticipated. Presenting real estate and negotiating from morning to evening was too demanding for him.

When typing on the computer, the right hand obeys as ordered, but the left hand does a bit of this and a bit of that on the keyboard. The brain only took into account the text knowingly typed by the right hand and ignored the solo runs of the left hand. The symptom has since started to ease, but someone else still needs to check all the texts he writes.

Having to quit the job resulted in an unpredictable mess. According to the insurance company, Mr. Aho was too healthy for a disability pension, and registering as unemployed turned out to be very complicated. For six months, there was no money coming from anywhere. Fortunately, there was some property he could sell.

He had to let go of his love of work. But who is a workaholic as a person, if he can no longer work?

A place in the world

A former wingman, a current lame-duck, as Aho likes to introduce himself.

A pilot must demand a lot of himself and strive for excellent performance. It doesn't really support the well-being of a person recovering from a stroke. Perseverance – or stubbornness, as his family members say – had pushed Aho into a situation where he seemed far too healthy to be too ill for work.

A stroke predisposes you to depression, and Aho has not been able to escape it either. He is still annoyed that his good recovery seemed to go to waste due to issues with money.

What if you had to fight for another three or four years in order to be able to retire?

What if you had to go six months completely without income again?

Why does a sick person need to be put through this as well?

In trying to find his place in society, Aho found a lot quite near him: the nature, physical activity, photography, family, friends. The Vanhankaupunginlahti nature reserve is located near his home. It provides him with fascinating and beautiful things to film all year round.

Membership in the HUS customer panel and participation in the training for experts by experience have opened doors for him and brought new light to his life. Now Aho can tell his story and share his experiences with other people who have fallen ill, and he finally feels that he belongs somewhere, that he is accepted.

“This is the perfect job for me. I try to help people like me so they would not make the same mistakes. I want to pull others up from the bottom of the bed to experience life and sunshine again.”

His message to others who have experienced a stroke is that one must identify and acknowledge one's disease. Aho himself has realized that he is too good at pretending to be a healthy person. Brain damage is not always so obvious to other people.

“Even if it feels like you are perfectly healthy again after a brain event, test yourself somehow, fake employ yourself to see how you are really doing. You can try to wake up at 6:00 a.m. every morning and do something strenuous for eight hours,” Aho suggests.

Pekka Aho's difficulties began suddenly. But when a favorable decision on his pension arrived in the mail just as suddenly, Aho realized that he had come out ahead after all.

Life sustains you, even when your wings are broken.

1. Do not ask yourself to do the impossible. After you have fallen ill, you may never be able to do what you used to, and you just have to accept it.

2. Live in the moment. Things started to get bad for me when I started mourning for what is to come and living in a planned economy. We only have this moment.

3. Look for hope and beauty around you. Admire the flowers; there's life in them. Economic issues and body ailments do not seem so essential when the sun is shining warmly on your face.